As well as two years ago, this year, Intedoor was introduced to the world public at the trade fair of air conditioning and heating technology, bathroom experience and renewable resources in Frankfurt, Germany. Due to unfavorable weather and the concurrent "Climate World" fair held in the same time in Moscow, this year's participation was not as high as in previous years, but still new contacts with foreign partners from Germany, France, Great Britain, Sweden and Malta have been created.

The attraction of this year's presentation was the unique project Massmöbel 2B with a configurator of the bathroom furniture series Variabox, Variasoft, Variaround and Variapur. 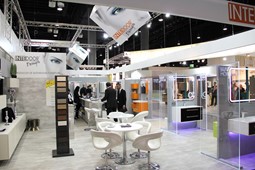